SECOND NAZARETH AT A GLANCE: TODAY 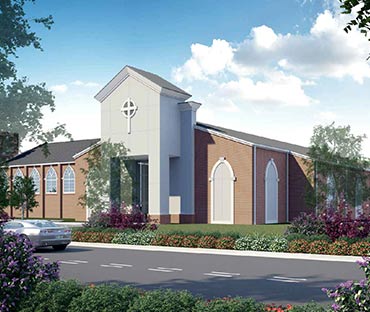 Second Nazareth prides herself on the ability to maintain an effective balance between tradition and innovation. Jubilee shaped-note and metered-hymn singing remain a key part of the music ministry, while balancing praise and worship with contemporary music. The church strongly supports its youth through educational assistance and scholarships but equally supports the elderly through a Prescription Assistance Program and a thriving Silver Saints Ministry. The church strives to "be the voice for those who cannot speak, the ears for those who cannot hear and the eyes for those who cannot see." Churches over past generations have been weakened by a failure to meet both the physical and spiritual needs of their communities. Many churches have adopted a narrow vision, focusing on only one aspect of ministry, but in today's culture of faith-based opportunities many Christians are eager to start reaching out to their world with both Good News and good works, and therefore they are searching for appropriate ways to integrate both into their ministry. Second Nazareth provides an opportunity to possess a "saving" and a "working" faith.

Reflecting on the past one hundred nine years, Second Nazareth Baptist Church has experienced many memorable moments. Some in laughter, some in tears - but always in praise to God. The Musical Choir concerts, presented to a standing room only crowd, glorified God and edified the Nazareth family. "Coming, Lord, To Thee" was synonymous with the Second Nazareth Jubilee Choir during Pastor Bowman's "Old Ship of Zion" radio broadcast. The adventures or misadventures at the church picnics kept us laughing for weeks, especially when we had to unload the bus for it to make it up the mountain. But we sang "Climbing Jacob's Ladder" with all the gusto we had. These are examples of the rigors of a true church family.

Just as we have relied on our physical strength in times of fun, we have relied on our spiritual strength in our seasons of grief. Second Nazareth Baptist Church, is made up of people--people who have publicly professed our faith in Jesus Christ, followed Him in baptism and who have joined together in this church so our worship, witness and ministry will glorify God.

Second Nazareth Baptist Church was founded in 1903. The original name of the church was Macedonia Baptist Church. It was located on Huger and Gervais Streets. While making a furniture store delivery Rev. Ralph "Rafe" Myers experienced the Lord's leading to establish a church at its present location in October 1906. This vision became a reality with thirty members worshipping in an old adandoned store on Gervais Street until Pastor and Sis. Myers acquired the current property. Church services were initially held in a "bush harbor" with a cloth-draped barrel serving as the pulpit. Baptism was held in ditches on Calhoun Street (Read Street today). Later a T-shaped church was built with a steeple and bell. A tabernacle was erected beside the church for special services conducted by Evangelist Skip Witt and to house meetings of the Wateree Association of which Pastor Myers served as president.

Pastor Myers served from 1903 to 1933 during which he organized the Deacon Board, Jubilee Choir (the first in Columbia), Musical Choir, Usher Board, Deaconess Board, Pulpit Aid Club, Trustee Board and the Baptist Young Peoples Union. Four ministers and fifteen deacons were ordained during this time. Rev. W.M. Gordon and Rev. Frank Watkins served as assistant pastors. Dea. Callie Patterson served as Chairman of the Deacon Board from 1924 to 1951. In accordance with the laws of the State of South Carolina the church was incorporated in 1910. Pastor Myers was an advocate of self-sufficiency and encouraged home ownership.

In 1933 Rev. A.C. Jones accepted the call as the second pastor of Second Nazareth Baptist Church and led the congregation until June 1949. Under the leadership of Pastor Jones (during the Great Depression) the debt was paid on the old church building, and the new church plant was started. The present sanctuary was constructed in 1945. Sis. Annie Gunter Myers, widow of Pastor Myers, deeded property to the church in 1946 resulting in the construction of Sunday School rooms and an Educational Building on the back of the T-shaped church. During this time the membership was organized into four clubs with the responsibility to present a financial report to the church on the first Sunday of each month. It was during the ministry of Pastor Jones the church became known in the state and nation, also training requirements were established for deacons, deaconess, trustees and missionaries. The membership was required to attend Baptist Young Peoples Union or Baptist Training Union. Fourteen deacons and three superintendents served with Pastor Jones and the Trustee Board was reorganized. Rev. Clarence Williams became assistant pastor at this time and Dea. Callie Patterson was Chairman of the Deacon Board.

In 1949 Rev. William McKinley Bowman, Sr., was called to lead the membership, a position he held until he retired in 1996. It became apparent during Pastor Bowman's leadership the church was not adequate for the needs of the congregation. After many meetings, prayers and much soul-searching Second Nazareth underwent major structural changes. The basement of the church (Bowman Auditorium) was completed; the old Sunday school building was converted into office spaces, training rooms, restrooms, choir rooms, etc. A new wing with Sunday School Rooms was added; central heating/cooling system, pews, and carpet were installed. The Baptismal Pool was moved back, tiled and heated. In 1957 the church commissioned Mr. Graham to render the murals in the sanctuary. The murals were touched-up in 2001 by Rev. R.F. Kinard, Ph.D. 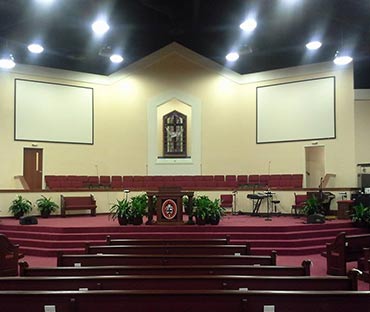 It was during this time Second Nazareth began to actively address community issues. As the result of a boyhood injury for which he was not properly treated, Pastor Bowman had a strong commitment to racial equality and challenging the status quo. He instilled this commitment in the Second Nazareth family. Meetings of the local branch of the NAACP were held at the church as well as several statewide strategy meetings for civil rights. In May 1969 Second Nazareth acquired its Life Membership in the NAACP. He encouraged the church to financially support the founding of the Columbia Free Medical Clinic and the Edgewood-Read Street Cooperative Community Improvement Council, Both of these relationships continue to this day. Second Nazareth became actively involved in other religious affiliations, such as the Gethsemane Baptist Association, the Baptist Educational and Missionary Convention and the Progressive National Baptist Convention.

The current administrative annex housed the headquarters for the Baptist Educational and Missionary Convention for South Carolina. The first "Soup Kitchen" in the community was opened by Second Nazareth, an effort continued today by the YWA in partnership with the Gethsemane Baptist Association. The annual thanksgiving project of the Brotherhood Club, Project Angel Tree, and the adoption of several community long-term care facilities are a few of the ongoing activities initiated during the leadership of Pastor Bowman. In conjunction with efforts to revitalize the Edgewood community the church, at the urging of Pastor Bowman, purchased a liquor store and converted it into a Boy Scout hut.

From 1996 until July 4, 1999 Second Nazareth Baptist Church was without a pastor. Rev. Ed Francis served as quasi-interim pastor. Invited ministers filled the pulpit.

Reverend J. Walter Hills was installed as the fourth pastor of Second Nazareth Baptist Church in July 1999. Pastor Hills' tenure includes a revised Member Orientation for new members, an expanded Wednesday Night Bible Study and in-service training for the Deacon Ministry and ministerial associates. The reorganization of the Male Chorus, and the establishment of New Vision Praise Choir and Praise In Motion (praise dancers) have augmented the church's music ministry. In 2001, with the encouragement of Pastor Hills, the Mission department celebrated its first Convocation in lieu of separate anniversary observances. The Benevolent, Progressive and Willing Workers Clubs celebrated a joint anniversary called a Trinity Celebration. Rev. J. Walter Hills, II, was ordained during the ministry of Pastor Hills. Dea. Moses Felder served as Chairman of the Deacon Ministry.

Pastor Hills continued the church's commitment to community service by encouraging the establishment of the Edgewood Foundation, a 501(c)3 entity. The church has also partnered with local schools as a part of Richland School District One's faith-based initiatives. During Pastor Hills' time Second Nazareth instituted its prescription assistance to the elderly, formalized its CARE Ministry, launched its website and published Spiritual Nourishment, a monthly devotional. (Spiritual Nourishment has been renamed Seasoning for the Soul.) The church's logo was also commissioned during Pastor Hills' administration. The Joint Board of Officers began updating the manual on church policies and procedures. Pastor Hills' tenure ended July 25, 2005.

September 7, 2008 Rev. Johnny Ray Noble, Ph.D., began his leadership of the Second Nazareth family. Focusing on teaching and preaching, Pastor Noble is expanding the evangelism outreach of the church as he leads us to be, "The Church in the Heart of the Community with the Community in its Heart.". Emphasizing biblical stewardship of our time, talent, treasure, and total being, the church is moving forward into the 21 century. Since Pastor Noble's tenure began the church has grown numerically, we have had aesthetic changes to beautify our sanctuary, audio visual upgrades, the strengthening of our ministries, a weekly radio broadcast, room set aside for nursery, creation of a young adult choir- Chosen Generation and children choir, and combination of the New Vision Praise Choir and the Musical Choir to form the Sanctuary Choir. We also have added the Hospitality Ministry to make our guests feel welcomed.

Pastor Noble instituted several annual events Unity in the Community, a day for all of the church family, residents of the community, educational field, and public service could come together for a day of singing, eating, fun, and fellowship. The Christmas Gala, a time for friends, relatives, associates, and neighbors to come together to commemorate the birth of our Savior, celebrate the miracle of Christmas, and present our youth ages 16-21 to society.

Under Pastor Noble's leadership the vision to fufill Christ's command to preach the gospel to all the world is foremost in our minds. Our church is focused on five areas of emphasis: outreach/evangelism, ministry, worship, fellowship, and discipleship. Pastor Noble has lead the church to purchase additional property to meet our ministry needs, and reorganized the Edgewood Foundation and its Board of Directors to better serve our community and families. The Edgewood Foundation also partners with other like minded private and civic groups to deliver Summer Camp, afterschool programs, and informational workshops.

Second Nazareth is excited about the future God has in store for us. Plans are being made to build a new 1,200 seat sanctuary, fully equipped with cutting edge technology and amenities to edify the body of Christ and serve humanity in greater capacities. God truly has smiled on the Second Nazareth church family.